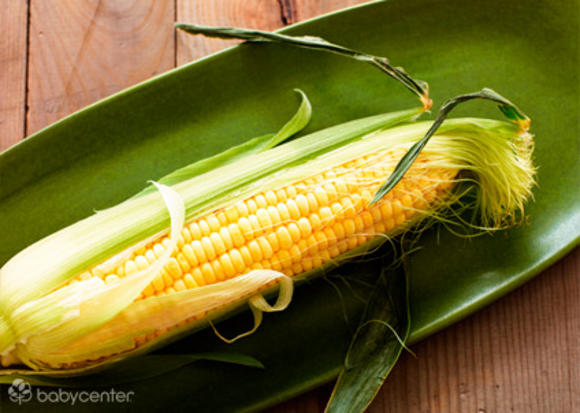 As a quick aside before I update everyone – the pregnancy comparisons to food are super weird. Last week it was a Mango, and now it’s an ear of corn? Okay, app. Whatever you say.

I will be 24 weeks this Thursday, the 23rd and have my routine OB appointment the following day. According to both my pregnancy apps, his brain is continuing to develop and his lungs are developing the “branches” of his respiratory tree which will help him breathe in the outside world. Apparently, he is now considered ‘viable’, even though he would need intensive neonatal care.

How am I doing? Great! We can now feel our son move around and his kicks are visible through my shirt/skin. I have been trying to get a video of this, but he stops the second that my camera starts to record. My biggest challenge right now is that he likes to sit as high as possible and makes my stomach super small which makes eating anything incredibly challenging. I have been trying to eat more often as Dr. Lee recommended, but man it has been hard. Third trimester should be even better in this regard (read: sarcasm).

What’s coming up next in our world is my Glucose Tolerance Test on the 31st. Essentially I need to fast, show up way earlier than I would like to, and have my blood drawn 3 times over the span of 2 hours after downing an incredibly sugary drink. They are searching for gestational diabetes, which can cause pregnancy complications if untreated. If my sugar comes back too high, I will need to meet with a nutritionist to see if we can regulate my blood sugar, and failing that, some women need to treat with insulin. The prospect of this freaked me out prior to being pregnant, but after IVF? I can handle a tiny subcutaneous injection. Not to brag, but I got prettttyyy good at it. As far as superpowers go it is pretty useless, but I’ll take my wins where I can get them.

In April, we are also going to have a 3D/4D ultrasound which I am SO excited for. And even better news? We will get a DVD of the session, so I will be able to share the entire video here! We might be able to see the baby opening and closing his eyes, sucking his fingers/toes, or even yawning, so cross your fingers!

My least favorite things: anything dairy that is high in milk fat (I’ve apparently become lactose intolerant because SOMEONE doesn’t like it in there…), the smell of Daddy’s chorizo breakfast sandwiches, and the smell of tuna (happens in the office).

That’s about it for now. I will update when I know more after this appointment on Friday, and after the Glucose Tolerance test.